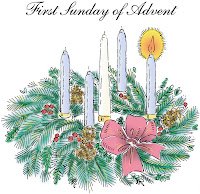 The beginning of the new Christian year is today, the first Sunday of Advent. We’ve lit the advent candle and spoken of God’s great love given to us at Christmas. In the lectionary cycle, we begin year A, the first year in our three year cycle. But for most of us, it seems like the end of the year. We have been conditioned through out our lives to expect the newness of a new year to begin a month from now, when the calendar flips over to January 2008. It’s confusing and sets up a tension between old and new. Is it time for the new? Or not?

Paul wrote to the Romans that their “salvation is nearer to us now than when we became believers; the night is far gone, the day is near.” To me that sounds like the end of things is drawing near and that the day we have been waiting for, the day of our salvation, the dawning of God’ kingdom, is close at hand, at least closer than it used to be.

Our gospel lesson finds Jesus teaching from the Mount of Olives. He has departed from his teaching at the temple, and in this section of the book of Matthew we find him answering some pertinent questions posed by his disciples. When is the time Lord, they ask. When will we know that the end is near?

Two other gospel writers record these same questions and Jesus’ answers to them. When the gospels were written, the Lord’s imminent return had not occurred, so it is not surprising that such interest existed in the hearts of the gospel writers about Christ’s return. As they waited, just as we do, the questions about the signs must have been as prominent in their thoughts as it is in many people’s thoughts today. Just how can we know when Jesus will come?

As you read the gospel of Matthew, along with the gospels of Luke and Mark, Jesus gives a variety of signs that the end is near: destruction of the temple, lightening, thunder, a darkened sun, a darkened night sky, falling stars, false prophets, nations rising against nations, earthquakes, famines, roaring seas, human perplexity.

When we read this list of signs, there is no doubt in anyone’s mind that all the things that Jesus has said would be a sign of his coming has already happened, once, twice, or thousands of times. It feels like the end should be at any moment. It feels like the new kingdom should be appearing even today, that the clouds should burst open and the appearing of the Lord should happen even this very minute.

What is sometimes hard for us is that we don’t like the idea of not knowing, do we? We modern people like to control our lives. We own day timers, day runners, PDA’s, blackberries, and all kinds of calendars, hang-on- the wall kind, electronic, and computer ones. I for one, hate to be caught off guard or forget an appointment, meeting or the like…and I think that I’m not the only one here who is like that.

We can certainly distract ourselves with speculation though. In fact a huge number of Christians distract themselves from work in the kingdom by continually focusing on the date, time and imminent coming of Christ. The multimillions of dollars made by Tim LaHaye on his Second Coming novels are proof of the great interest people have in this subject. He has over 25 books out now revolving around the second coming of Christ. For a fictional account, they are fascinating reading.

But we should not be taking our warning from Tim LaHaye or the dozens of other Second Coming gurus, who try to convert us by threatening us with that second coming. The warning is clear enough coming from the word of our Lord Jesus. If you notice, Jesus words to his disciples are not filled with fear, but with the hope of the second coming.

Jesus was telling the disciples that they were quite like Noah, that they would be saved. For Noah, there was no surprise when the rain drops began to fall in the desert. Noah was well prepared for what was coming. He had been busy building the ark. He had been about what God had told him to be about.

When we go back and read what God said to Noah, we find that Noah did not know when the rain would begin. God did not say, “Noah, build an ark. I going to start the rain on Saturday morning at 10:30am.” No what God said was build the boat, be ready.

That is exactly what Jesus is telling his disciples. The second coming will not happen when you expect it, but it will be happen. Jesus relates that the time will be like the moment that a thief breaks into your home…when you least expect it. In other words, you don’t know when, so take measures.

The measures Jesus wanted his disciples to take, and the measures we are supposed to take are to be ready. Be ready for that glorious day of his appearing. Watch for it. Expect it at all times. Be prepared like Noah was prepared.

Jesus has not left us alone in our preparation, but Jesus has left with us a great advocate, the Holy Spirit, who guides us to all truth. We are prepared for the day of Jesus’ second coming when we have placed our faith in Christ as our savior. Then our salvation, which comes nearer everyday, is assured.

The good news for today is this: Jesus is coming. Prepare yourself. Watch. When the rain drops start to patter the ground, and the lightening and thunder begin, be propped back on the deck of the ark of God, the great ship of Zion, living in the safety of the Lord Jesus Christ. Amen.