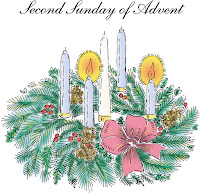 Here we are at the beginning of the richest part of the advent season, the second Sunday marking the halfway point. Last week our gospel lesson had a word from Jesus about being awake, watchful, and prepared to experience the coming of the Lord. This week, John the baptizer tells those who came to hear, just how to prepare for the Lord.

Paul, from the book to the Romans announces that Christ comes so that all, particularly we Gentiles, shall have hope. And from the prophet Isaiah, we have a vision of the kingdom which comes in Jesus, wolves and lambs lying together, children and snakes playing, and no more hurt or destruction. Yes we are indeed in a rich, rich part of Advent, and the good news of salvation at hand.

But, when we again listen to the words of John the baptizer, it may appear that the news he is bringing is not so good. Shouts about snakes in their midst, repentance, unworthiness, and the burning of the unquenchable fire, all of these remind me of the messages of some of the “hell and brimstone” preachers we all heard. And of which thankfully, are becoming fewer as the years go by.

You know some, or have probably have heard a few of them in your lives. They are masters of persuasion, and perfect purveyors of the altar call. These preachers seem to almost have been eyewitnesses of the fires of hell, explaining its heat, the eternally searing skin, the sulfur, the totality of suffering, all in an effort to convince people that hell is real and they are headed there, if they, at this very hour do not turn from their wicked, snake-like ways!

They’re style of preaching is of the John the baptizer school of preaching. So where is the hope in a sermon like that and like the one that John preached? The hope is found not in the preaching, but in the one of whom they preach, Jesus.

Such sermons appeal to many of us, because after all, we do not want to go to hell when we die. (some people avoid hell, by denying it) Such appeal is exactly what brought the Pharisees and Sadducees out to see this spectacle of preaching that John was doing. It wasn’t they believed that they were going to hell (they did not really have the same concept of it as we do), but they simply believed that life as a Jew in those days was a “hell” in itself. They desperately wanted the kingdom of God to come on earth and deliver them from Roman occupation and to restore the throne of their father David.

That’s what they wanted but what they heard from John was repentance. He preached that lives must be changed in order to prepare for the coming kingdom, which he called the wrath to come. Much as I want to embrace John’s entire message…there is something that needs to be cleared up. It is the idea, that we can, or are able to “clean ourselves up.” Obviously that is not an orthodox belief for us, because we believe that it is only though the Holy Spirit working in our life, that we are in any way “cleaned up.” All the washing in the world, John’s or otherwise, all the striving to be good, righteous, and holy will come to a big fat zero without God in our lives.

The Pharisees and Sadducees were the clear evidence of that. They won the prize for striving to live a holy life. In fact they were the top repenters of their day. Not only did they continually work and work to remain pure, they were insistent that every other Jew was to be just like them. Only then, when everyone had finally become pure, would the kingdom finally come.

Only, it couldn’t be done. Not by the purest Pharisee, not by the most pious of Sadducees, not by John, the ones he was baptizing, nor by any one of us. Try as we might, we just can’t be repentant, holy, or righteous in and of ourselves. We need God’s help. We need God’s grace, God’s gift of Jesus.

There in lies the hope. All of the hope that the people had for redemption, for restoration, for the peaceful life where wolves and lambs, children and vipers would romp together in harmony was coming in the person of Jesus Christ. John said…one is coming. Prepare, may the way straight.

We are even today making preparations. This week I put up my Christmas tree, and bought wrapping paper, and set out the nativity on the dining room server. I’m practicing Christmas carols, reading a new advent devotional, and sending Christmas greetings to my friends and family. But I have to ask myself if that is what Jesus meant when he said to prepare. I don’t think so.

According to what John the baptizer is saying, readiness for the one coming, requires repentance, a turning around, letting go, a kind of “doing-things-differently.”

Let’s imagine. If it helps you, close your eyes. Imagine that you are walking along an uphill road; it’s steep; you are carrying quite a load of stuff. You have yesterday’s newspapers, at least a month’s worth, with all of their bad news tucked under your arm. In your hand you hold the handle of a trunk of old clothes. They are favorite that you just refuse to turn loose of, even though they no longer fit you, they are out of style, and have moth holes eaten in them. The trunk weights a ton.

Up the hill you trudge, step by step, wishing that the bundle of heart aches that are strapped to your back was not so heavy. You know, those mis-placed and hurtful words you spoke to your friend, those ill feelings toward your neighbor that you constantly carry, those old addictions you can’t shake no matter how good you try to be, those ancient fears of failure and of being alone of never being healed, those broken relationships. You wished you could drop the bundle of heartaches, but somehow you just can’t let them down. But you wish they didn’t weigh so much.

Repentance. It means letting go, dropping everything, turning around. Repentance is being prepared. It’s looking to Jesus and saying, I can’t do this on my own. I can’t carry these heavy loads up this steep hill. Lord help me. Forgive me, and help me forgive; help me kick this addition that chokes me; cleanse me with your Holy Spirit.

Repentance is a prayer to God; A true action, a decision, one that is from the heart. Repentance is giving yourself up to Jesus to be washed by the only sin cleansing power in the universe, the grace of God through the power of the Holy Spirit.

Today I say that God is calling us all to repentance. Our repentance means that we know we are sinners, but we are ready to lay those sins down, and to turn towards the one who is coming, Jesus.

Jesus is all of our hope. Jesus is the hope of the world. And Jesus is coming to give us love, grace, forgiveness, abundant life, and peace. Life in Christ is a more excellent way of living. Thanks be to God.