The bow will be in the clouds, and upon seeing it I will remember the enduring covenant between God and every living being of all the earth’s creatures. Gen 9:16 (CEV) 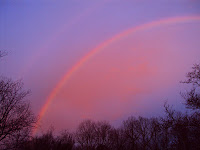 You can ask Ed, my husband, and he will tell you I am crazy about rainbows. Of all the physical phenomena that appear in the sky from time to time, I love them the best. As he knows, I will run him all over the beach just to see one over the water, or anywhere for that matter.


I’ve seen a lot of rainbows because I know when they will normally appear. They will pop up when the sun is at or close to the horizon and shining towards the water in the eastern sky. This happens just after a storm passes from west to east and the sky has cleared in the west and is still cloudy in the east.


Frequently I have seen rainbows at times when people I know have passed. That has happened on four distinct occasions, the most notable was when my sweet aunt Nib died. As we were traveling to her memorial service, God delivered a brilliant double rainbow. I’ll never forget that one.


Another double one I saw was over the ocean when I was with my home church on a mission trip in Vieques, Puerto Rico. Did you know that a double rain bow reverses colors? From indigo, blue, green, yellow, orange, and red to the reverse, red, orange, yellow, green, blue and indigo. I photographed one of them once.


But, by far the neatest one I’ve seen I saw this morning. About 7:15am I happened to walk out to the car to retrieve some towels and looked up to the western sky, and there was a rainbow! It was amazing! No rain, no late evening storm, nothing usual about it. I ran inside like a freak, grabbed my camera and shot a picture of it. If you look closely, you can see the second one. It was gone in three minutes.


When I see a rainbow I always think of God’s promise to the earth, and I am reminded of God’s promises to me. I think I chase rainbows, because I love to chase God and catch God in one of those creative moments that are uniquely divine…like this morning when I saw the morning bow in the western sky when it had not rained at all.
Posted by Rev. Dr. Judy Hilton Eurey at 9:10 PM